After the Cyclone: Fishing a new Seascape

We arrived at Gladstone Marina to be greeted by grey skies, scudding showers and that warm tropical humidity that occurs in Queensland.  Three weeks before, Cyclone Hamish had swept down the Barrier Reef and vented its full fury on the Swain Reefs. The strongest recorded gust had been 295 km/h before the recording instrument broke. It was the most powerful cyclone to hit the area for many years, and professional fishermen were asking for government subsidies for compensation!! If you wish to obtain further information on Hamish it can be found on the Queensland BoM site.

We left the Marina at 1700 hours with the crew being Bruce, Steve, Giles, and an attractive recent addition; Christie. The trip out was quite smooth and a good sleep was easy to have.

Sunday 5 April saw us catch a number of trout and a few spangled emperors in the shallows of an unnamed reef with a few caught in the deeper water. The afternoon saw conditions reducing to no wind by 1700 hours and quite a few coral trout caught in the deeper water [25 to 40 metres], with Peter Doyle catching an excellent 18 kg blue spot trout. This was one of the best caught off Kanimbla and unfortunately it could not be revived despite ongoing efforts at resuscitation. Steve the chef caught a 15 kg Spanish mackerel off Kanimbla. Reg caught a few good trout and Pud, Cyril and Brian got a nice number of sweetlips. It is noted that various fishermen were photographed with Peter’s trout and it can only be speculated as to how many stories about the fish I caught will be told at certain points around Australia. Faux pas of the day went to Kevin Nott who attached his reel to Brian’s rod and did not identify the error till we searched all the rod tubes and checked all rods before his brother pointed it out his mistake to him. That night we fished off Kanimbla and caught sweetlip. New comers; Berne and Nick Coady started to realise just how powerful reef fish are – as they lost a few battles. 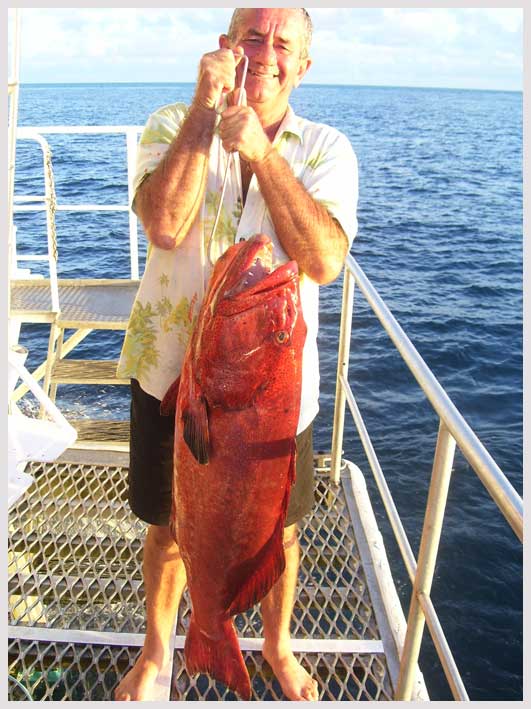 On Monday we had an easterly of 5 knots and before we left Kanimbla, TJ’s baitcaster was spooled of 300 metres of 10 kg line – probably a spanish mackerel. All dories were manned and found that excellent trout [2 kg to 3 kg] were in the 25 metre to 40 metre region on the outside of the reef. It was one of the best days for trout that Kanimbla had experienced, and all were in prime condition. There was no swell and little chop that made this day the highlight of our trip. The afternoon was not as productive, however the conditions remained fantastic. Fish of the day went to Brian Baker for a 5 kg green job fish.

On Tuesday morning the wind remained at 10 knots and we maintained a good quantity and quality of fish.  Bruce caught a number of sweetlip just before Kanimbla moved to Big Sandy Reef – in anticipation of a change in weather. That afternoon the catch in the shallows was poor – opposite to our experience of plenty of fish in June last year when we got in excess of 200 packs per day for 3 days.  Wind strength grew to 15 kts by nightfall. Appetisers consisted of Prawn and Coriander Vietnamese Rolls, and Coral trout Wings – so scrumchious!!! The main course was coral trout and it was noted that no one had brought their bathroom scales – very strange!!! Fish of the Day went to Pud Pullen for a 3.5 kg coral trout. That night Pud, Cyril and Jeff submitted themselves to Steve’s barberous skills and ended up with bald heads. Also we caught a few squid and Dave Frederick was well and truly inked by one of them [see photos].

Wednesday saw further deterioration of the weather with over 20 kts from the SE. It was choppy in the shallows at high tide. sweetlip and spangled emperor were caught in the shallows. That afternoon some of us took it easy on Kanimbla as showers were falling. TJ and Len, as well as Bruce and Reg caught just under half a tub at the entrance to the reef and in the shallows respectively. They also received some fairly heavy showers of rain. Fish of the Day went to Bruce for a 3 kg spangled emperor.

Thursday saw 25 kts of SE wind with white tops and rain everywhere; hence only 2 dories went out in the morning. Few fish were caught and TJ and Len took a wave over their bow and ended up with a little quick bailing. That afternoon saw the rain easing and all dories headed out on the low tide – much calmer.  A variety of sweetlip and trout were caught. That night we elected to leave for home after breakfast on the Friday morning. Fish of the day went to Trevor Nott for a 2.5 kg coral trout.

The trip home was quite acceptable with a sea on the port side. We arrived home at 11 pm and had a good sleep before driving or flying home the following day.

Fish of the Trip went to Peter Doyle for his magnificent 18 kg blue spot coral trout.

The captain and crew were thanked for their usual fantastic efforts.

Cyclone Hamish dashed the hopes of John’s Group from Forbes/Parkes of travelling to the Swains Reefs. Their cohorts – Laurie’s […]