Bruce Robson brought a small contigency of Superseamen and some 1st time reef  fishermen aboard Kanimbla. The group performed very well considering the number of Kanimbla novices, due in part to Bruce & Reg’s expert guidance. 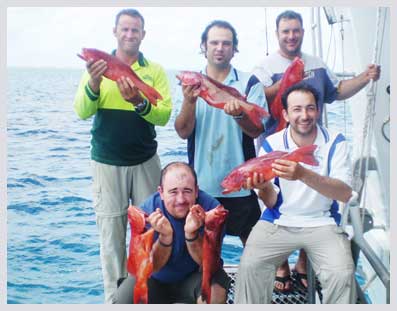 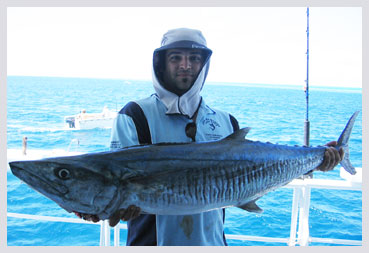 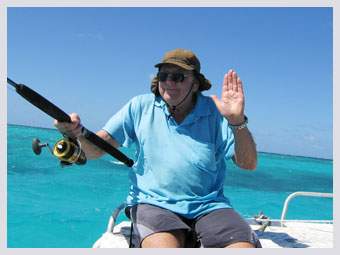 Talk to the Hand- busy fishing!

On arriving at Gladstone it was clear from the 25 knot south easterly wind that this trip was probably going to be to Swain Reefs, and not Saumarez Reef, and would be a little more of a challenge than some of the previous trips with good weather.  We left the Marina at 1700 hrs and were introduced to the new skipper Chris, regular deckies Charlie and James, and the chef; Steve.  Steve had been chef on Kanimbla some years ago and had recently returned on board after running his own restaurant.  It was a bumpy ride out to the locals and we were somewhat concerned at what the Capricorn Channel might be like.  Fortunately conditions in the channel were probably a little quieter than anticipated and we had broken sleep on the way out to the outer Barrier Reef.

On Sunday morning we arrived at Abrahams Reef at 8 a.m. and it was pleasant to have nice calm seas and be able sit down and have a breakfast in comfort.  The winds had not abated and we headed into the shallows with Reg, Bob, and Bruce each taking a dory to educate the new starters from Sydney on how to fish within the reef system.  The Sydney contingent had studied the educational material on fishing in the shallows that had been previously supplied to them. They had a lot of prior fishing experience in other locations, and learnt quickly.  Most boats ended up with a number of sweet lip and coral trout.  That afternoon on the low tide the boats tended to fish off the back of the reef and while we were out fishing Steve the cook caught a red emperor. Fish of the day went to Robert with a 6 1/2 kilogram spangled emperor.

Monday saw us back in the shallows at Abrahams Reef where the wind had reduced only a little.  Similar to the previous day we found that when we got to a hole where there was fish, after two or three being caught the rest would disappear.  It meant that we had to keep working and finding new holes all of the morning.  In the afternoon we went off the back of another reef and caught a number of good red throat emperor and coral trout in water up to 30 m deep.  Fish of the day went to Bob with a 5 kg red emperor.  That night Bob caught another red emperor of a similar size.  A fisherman, who should remain nameless lest he be embarrassed, put down his magnificent Saltiga outfit on the floor of the dory for a few seconds. He was about to find that, what might have been the fish of the day, took the bait and pulled the rod and reel over the side of the dory, and it was never to be seen again!

On Tuesday the wind reduced to 20 kn from the southeast with good fishing and a few full tubs of trout, sweet lip and spangled emperor.  Another fishermen, again who should remain nameless, almost lost his Stella outfit over the side in a similar incident to what had occurred to the Saltiga.  That afternoon we went to Sanctuary Reef which was generally quieter except for the boat that Sam, Rod, and Michael were in.  Fish of the day went to Sam with a 13.5 kg Spanish mackerel.  By late in the afternoon the wind had reduced down to about 10 kn.

Wednesday morning saw the wind up to about 15 kn at Sanctuary Reef with a good catch of sweetlip, spangled emperor and coral trout by most boats.  These fish were of a good size.  We then travelled to Taiwan Reef at lunchtime for an afternoon fish, however caught very few.  Fish of the day went to Len for a coral trout of 3 kg.  That evening we had an exceptionally good meal with an entree of calamari and sushi, a main course of coral trout, and desert of profiteroles.

Thursday saw the wind maintaining at 15 kn from the southeast at Taiwan Reef and only one boat got fish in the shallows, mostly the boats caught good trout and lipper in about 20 m of water.  Trevor and Kevin led the way in the deep-water fishing with a substantial catch.  At lunchtime we travelled to reef number 22/129 where we caught a few fish in the shallows and a number on the edge of the reef.  Dave Fredrick caught a 6 kg red emperor in about 43 m of water which went on to become fish of the day.  Rob caught a nice spanish mackerel and Rex an excellent coral trout.

Friday saw the winds dropping a bit further on and they went back to 10 kn from the same direction.  Dave caught a spanish mackerel in the early morning off the rear Kanimbla and a number were lost due to reasons that should not be mentioned in this report but will be indelibly stamped in his memory. We caught a few fish in the shallows with a good selection of trout and red throat emperor off the edge of the reef.  Kevin caught a lovely red emperor which subsequently went on to become fish of the day.

As usual, on the trip back to the mainland, the captain and crew were thanked for an excellent trip with great food and company.  Fish of the trip was presented by Bruce Erwin [last year€™s winner] to Dave Fredrick for his 6kg red emperor.

After a beautifully calm journey we arrived back at the marina in the early hours of Saturday morning where we had our usual breakfast, divided up the fish, and said farewells – with the anticipation of another exciting trip in 12 months time. 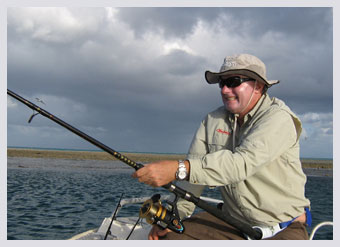 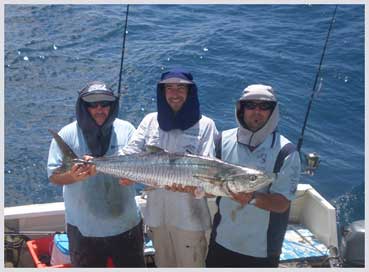 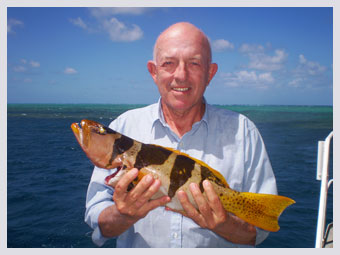 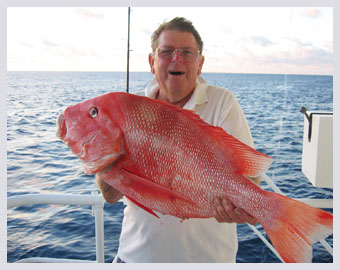 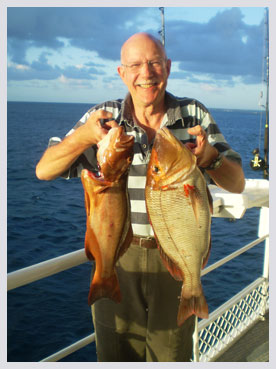 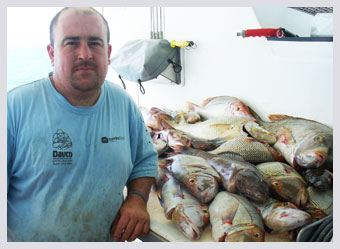 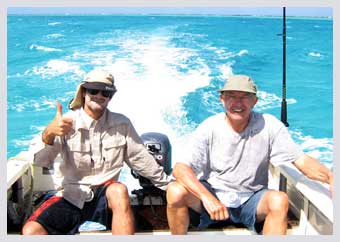 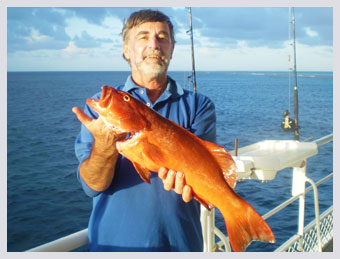 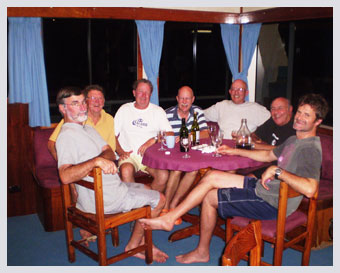 A week of near perfect conditions greeted Dave’s Crew from Brisbane. Some wonderful catches were made and a feast of […]

Here are some more guests from the Hunter Region and PMQ ably lead by Steve: