The SuperSeamen were to return to fish Saumarez Reef only to be thwarted by the wind. Limited to fish the Swains reef still provide some great catches. Who would be disappointed with these fish? 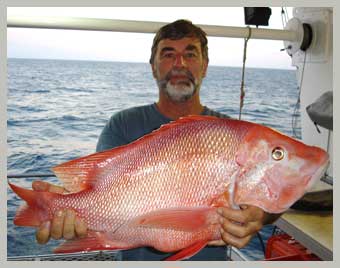 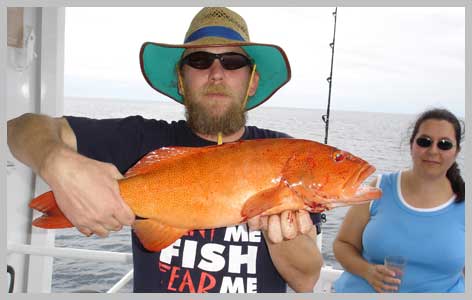 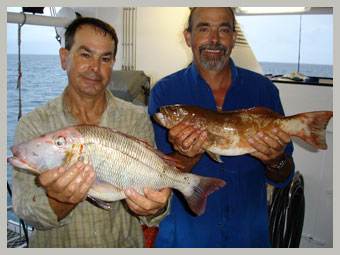 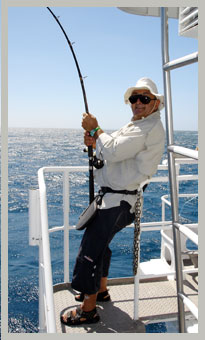 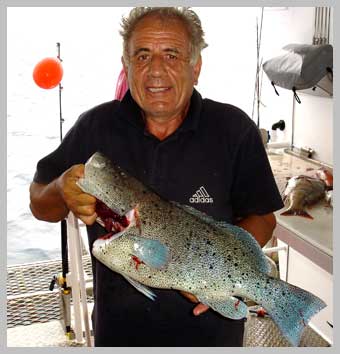 Here is Bruce Robson’s story of the week!

ONCE MORE TO THE REEFS DEAR FRIENDS

With this year’s exceptionally warm water in the East Australian Current being cooled by two cyclones a few weeks beforehand we anticipated friendly weather gods and good catches as we headed towards Gladstone. The fickle gods were not about to smile on us and the trip conditions were quite different to those experienced on last years brilliant and unforgettable charter to Frederick Reef. Most of the group were flying from various destinations on the east coast, Melbourne and Canberra, while three of us were driving from the Mid North Coast of NSW as usual.

Adam was skipper with Deb as first mate and, Joel and James as deckies. The trip out was quite smooth, and as we neared Heralds Prong Number 1 Reef on Sunday morning, Dave and George caught a spanish mackerel each. We had 5 dories out that morning and ended up with 50 packs of mainly lipper [red throat emperor] and trout [coral trout]. The afternoon session started off with continuing smooth seas but finished early as a weather front came through with winds to 30 knots and rain. All dories returned to Kanimbla by 3pm and those warm showers were just what we needed. Some nice trout were caught in that session but that evening produced a few unstoppables from the duckboard and Jason caught a good cobia. Dave Bodman’s spanish mackerel was judged fish of the day.

The weather front sorted out the ordinary fishermen from the super seamen
Monday morning presented us with 15 to 20 knots of south easterly wind and this would stay with us for the week. Bruce dropped in a pilchard first thing and less than a minute later a cobia took it. Remora were everywhere around Kanimbla and became nuisances.

Bernie got a sizeable cowtail ray which gave him a 30 minute struggle. Jeff caught a good red emperor, and George landed a good cobia and spanish mackerel – which gave him fish of the day. We moved to Pike Reef but the shallows fishing deteriorated a bit, with tide against the wind. We got a reasonable number of trout and lipper with a few hard fighting chinamen fish, and a number of parrot fish from Kanimbla.

Tuesday was at Banana Reef in the morning and Horseshoe Reef in the afternoon. It was fairly quiet except for a few dozen mack tuna from Chris, Trevor and Jeff, and a number of sweetlip by Reg and his crew. George landed a sizeable green job fish from Kanimbla. Trevor Nott got fish of the day with an excellent sweetlip. At 11pm that night, Dave Bodman got a lovely red emperor.

Wednesday was at Horseshoe reef which provided a very calm anchorage. The morning produced a reasonable number of trout with lippers being more prolific in the afternoon. One southern fisherman, who shall remain nameless [to some], had two rods out. When his live bait was taken he put down his Calcutta 700 reel with 20kg Wilson Live Fibre rod outfit, went to the live bait rod, but missed the fish. He then returned to his smaller outfit only to hear it splash into the water and get hijacked at speed. Deb and Adam dived for it; however the fish had taken it further away. We had the traditional coral trout meal which was sumptuously cooked by Deb, and the recipe is on Kanimbla’s website. Dave’s red emperor from the previous night took fish of the day. Later that night Bernie had a tussle with a large spanish mackerel which weighed in at 34.5 kg. About 2am the following morning another nameless fisherman put his mate’s rod ‘in’ a rod holder, and ten seconds later it somehow jumped up and out of the rod holder for a very early morning swim!

Thursday saw us at Sanctuary Reef which was fairly quiet on the fish front but a few good fish were landed such as Ged’s trout and Dino’s blue spot maori cod. Late in the afternoon Peter Doyle and George Calleja each lost a sizeable and unseen fish. Warren Plowright had a lengthy fight with a shark off the duckboard and required assistance from Kevin and Adam to get it to the boat, from where it was released. Bernie’s fish from the previous night won fish of the day.

Friday morning saw the same conditions continuing with an improvement in the numbers of lippers and trout being taken at Reef 22-123. Julie landed fish of the day – a lovely barramundi cod. We packed up our gear at lunchtime and headed back home across the open ocean. The ride was quite comfortable with a swell up to two metres on the stern quarter.

The award for ‘fish of the trip’ was presented to Bernie Kepars for his spanish mackerel and Reg latter was awarded ‘fisher of the trip’ for all the assistance he provided to others about fishing in the shallows. We ended up with 22 packs and two whole fish each.

Reg trying to impart how sensitive the bites are in the shallows
Despite average weather and fishing it had been a most enjoyable trip and a number of people who were on Kanimbla for the first time commented on just how good the boat is and how brilliant the service was from skipper and crew.

* Bruce actually had some great Cartoons to support his story but unfortunately I can’t manipulate/use them …FYI please use jpg. gif or bitmap formats for images