Local businessmen  joined us for their yearly network  conference with the added bonus of some great fish to take home. Here’s George’s version of events. 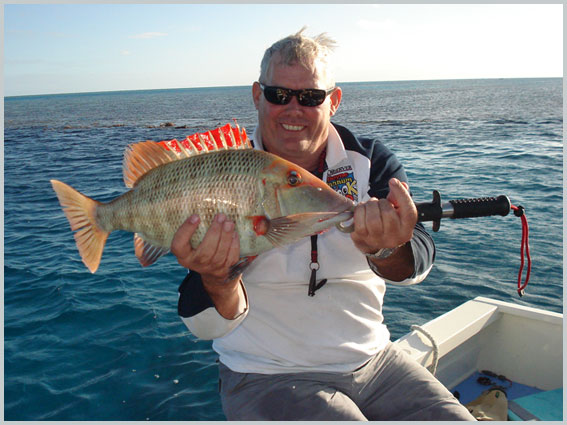 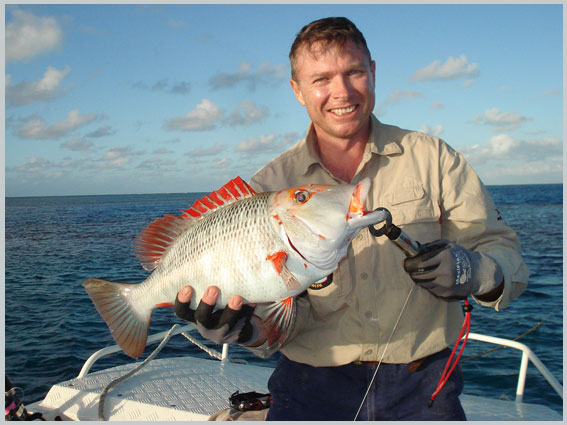 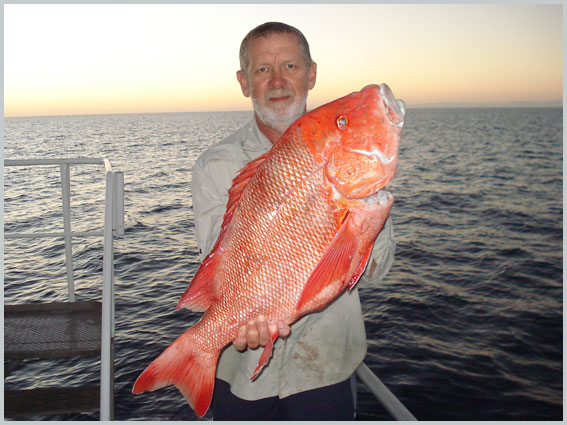 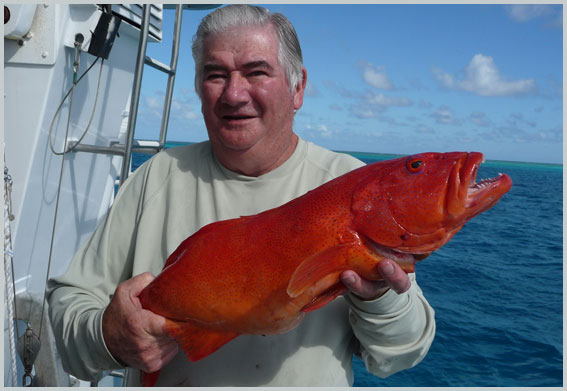 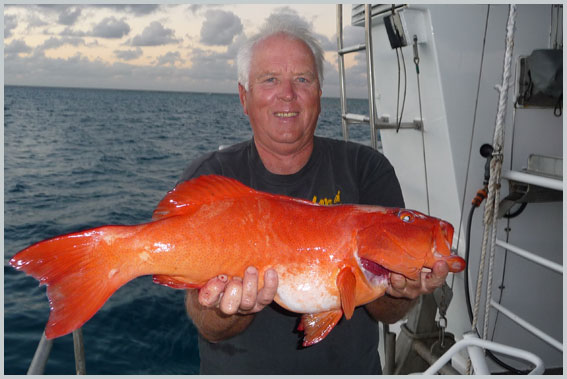 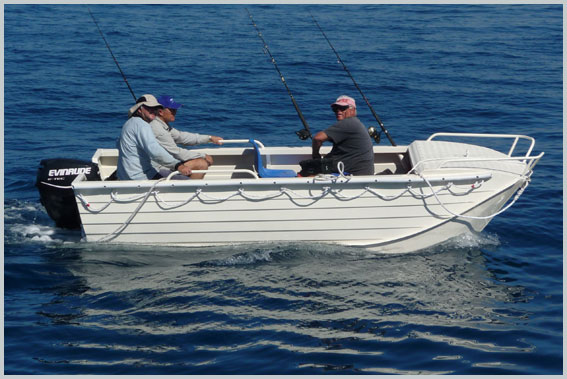 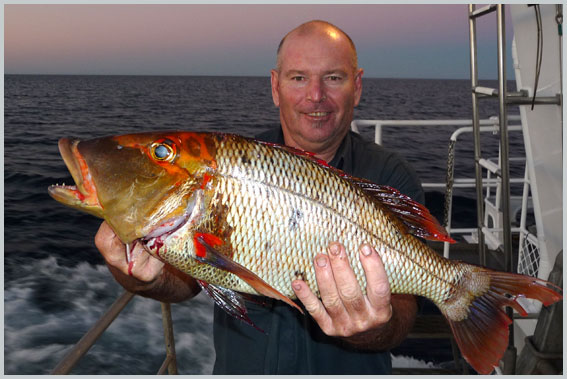 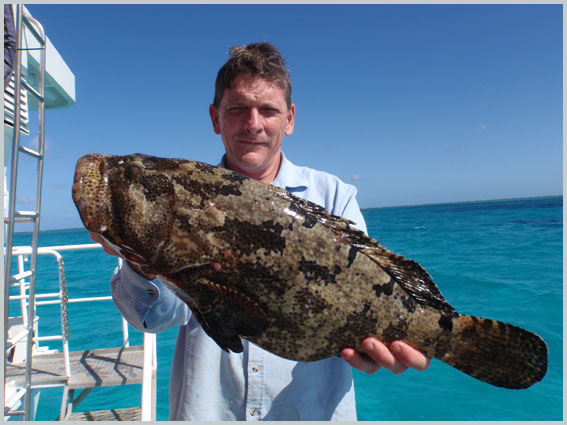 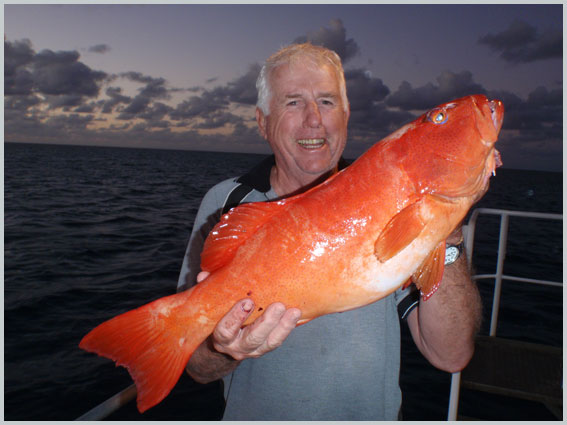 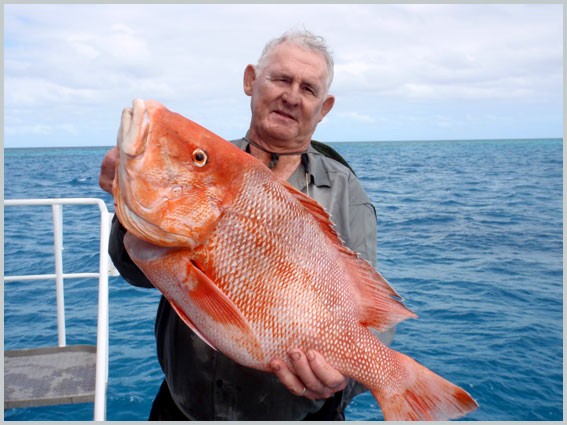 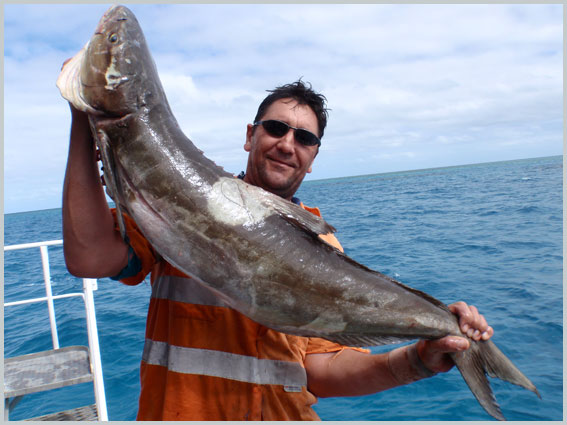 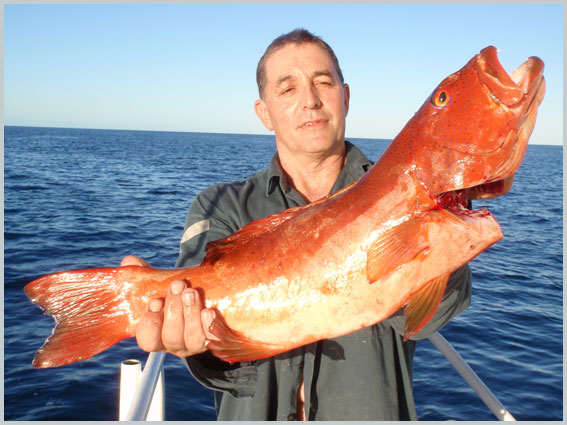 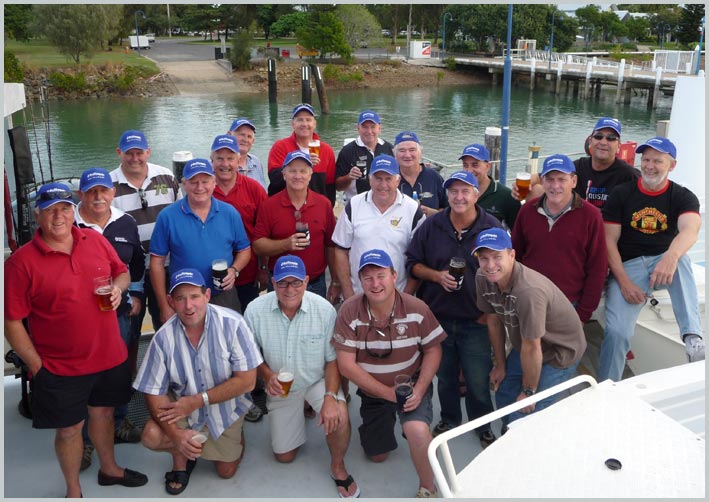 Who said fishin’ was easy?

Peter Mouna, the new debutant was told a story that fishing at the Swains was easy; ‘You just stand on the reef edge with a baseball bat and selectively bash the big parrot fish as they come over the reef’. This is obviously far from the truth but a good story none the less. Often the fishing can be quite a challenge; the willingness of fish to bite, the weather and the tide all complicate the situation. Fish are fighting for their lives but for us, it is just fun. They have a little more to lose.

Perhaps it is correct to say that most of the fun on a Swains trip has little to do with the fishing. It is more about your mates, the food and the drink and after this comes the fishing. The challenge is to successfully embellish moments of madness of fellow fishermen (nominally known as —-ups) so that the nightly award sessions can provide due recognition.

We know we are not in for a calm trip but this doesn’t dampen spirits; the focus is on the more relevant fishing action. As it turned out the 7 day forecast on the day we left port was exactly how the weather developed; mostly 15 to 20 knots with only one very good day at 5 knots.

On every trip, much of the after dinner focus is on the back deck as a few usually engage the squid in a battle of wits. Sometimes the squid are more clever. One night a few took on the ritual challenge and as usual there were a number of onlookers freely providing “expert” advice but keeping their distance. Doug, trying his luck, hooked a squid and was encouraged by the onlooking crowd to lift the squid into the bin. Sadly he misjudged the weight of the squid which hit the top handrail. The squid swiftly retaliated by launching his ink all over Doug. The grey headed Doug now had a black Mohawk which continued down the length of his back. Most of the Kanimbla in the vicinity received a similar coating. What a mess. But none of the onlookers received anything except blame from Doug.

A quick shower undid the hair dying but the story was relived the next night during dispatches.

Joel was feeling a little pressure in the early days of the trip as he left it to the eleventh hour of each session to catch his fish. He was desperate to fish well. His daily management of the tackle boxes was appreciated though Ed believes someone was not as supportive as the boxes were readjusted. Joel’s rod stands were also invaluable.

Although everyone was keen to catch fish, it could be said that a few are keener than others and Kiwi, Rowan, Joel, Bruce and Ed like the after dinner sessions. Russell was also an enigma as he fished the whole day with me using 80 pound line and a single 9/0 hook, caught heaps of fish and did not have one snag. There was a lesson to learn there.

After two days at Herald Prong 2 which once again lived up to its poor reputation, we moved to DJ reef. Though I must say I was happy with a 9kg cod on the first day at Herald Prong. At DJ reef drift fishing was the elected and most successful tactic. Most dories had successful morning sessions with a number having half a bin or more but the afternoon sessions was a little below expectations. Brendan and Ed fished well in my dory and contributed heaps to our good catch.

My crew the next day included Alan Stanton and Don and once again this team were very successful. Don who had a disappointing previous day had an excellent day which culminated in a 14 pound red (the highlight of the morning session). Kiwi disputed this assigned highlight as he considered his 20 pound black king the worthy trophy fish of the morning.

The next day at a no name reef, Peter would not leave his treasured spot on the reef as he slipped into the trevally though he was disappointed that we did not take them home his 4 trevally provided good bait for the boat. Chris and Doug contributed a couple of trevally amongst their very good catch of trout and sweetlip.

Wednesday, as predicted was the pick of the weather; less than 5 knots for most of the day. These are the days we dream of. As could be expected this day was our most productive. There were many quality fish caught; large red throat (4 pound), spangled emperor (8 pound), trout (6 to 8 pound) and red emperor. I was lucky to just pip Doug’s red with an 18 pound fish.

Dicky Norton had a good day and had 3 good trout to his name before either ‘Sybil’ or I had caught a fish.

The Skipper parked us on a secret spot for the last night and suggested we fish for mackerel on the bottom at night. All this sounds a little unusual but sure enough he was right and Kiwi landed an average size Spanish and a few sweet-lip about midnight when the tide run slowed. Harts tried earlier in the night only to have Kiwi’s line bitten off. Upon refection we did not make the most of this night.

The wine connoisseur, Klosey has stuck with his lighter outfit all week and though he has had more bites he has not landed more fish. There is a penalty associated with lighter line.

Alan Millhouse has fished well all week and like me he loves using a handline.

Once again our trip took the most gear. There must be a prize for that. We are good at filling all the space. Doug arrived with just so much gear (or was that junk) so much so that it fill every square centimetre of space in his Pajero (front seat included). Allan Stanton had to get a lift down to the boat with Doug’s wife because he couldn’t come down with Doug. This then translated to his dory which when loaded with his gear only allowed room for one other crew member. Bruce the skipper had great pleasure in reminding Doug about how much gear he had.

Brendan and Billy did not mind Doug bringing his gear which included some 15 rods as they both borrowed one from him.

A story about the trip that did not recognise the quality of the meals would not be fair to Steve. His coup de grace was the seafood night, a three course delicacy of calamari, oysters and coral trout.

This year’s fishing was dominated by drift fishing where previous years had predominantly been gutter fishing on top of the reef. With the 15 to 20 knot wind, the determination of all the team to each day head back into the unfavourable conditions was commendable.

Our catch was about 47% lipper, 30% trout and others which included cod, emperor, and parrot.

We are already talking about how we are going to do it next year. The planning will start this month.

“Somina linea stricta” (Dreaming of tight lines) ….. till next time

Gary and the gang enjoyed a great week of fishing.