Ahoy fellow game fishermen, the mighty Superseamen (their choice of superlative) have once again laid claim to some amazing fishing outcomes during a 10 day charter to the Coral Sea. During our most recent 9 day QLD Spawning closure , the Kanimbla set its course to the outer Coral Sea reefs of Frederick, Kenn and Wreck reefs which fall outside of Qld waters into Australian Territorial fishing grounds. Fortunately, the weather proved sufficiently mild enough to attempt a full 10 day charter to these reefs. 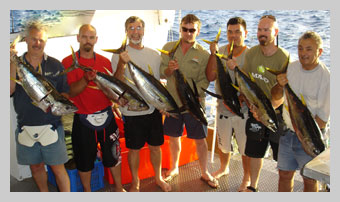 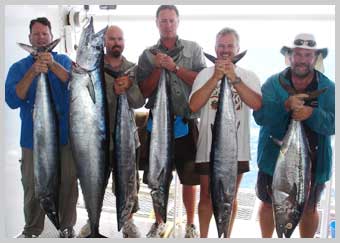 This Oceanic Trout isn’t a keeper. A size limit of between 50 – 80cm exist for this species and so the fish was released. There is also a possibility of large carinivores like this trout carrying Ciguatera Toxin , just another reason to return this fish to the sea. This trout IS a keeper. 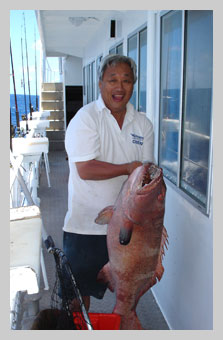 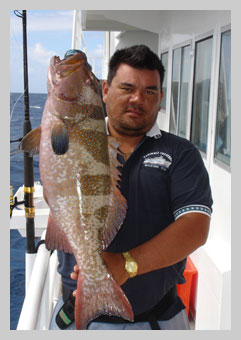 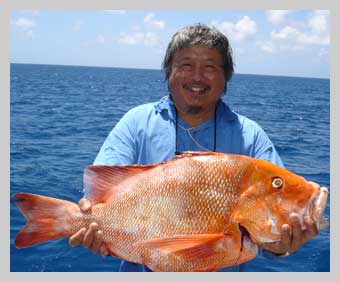 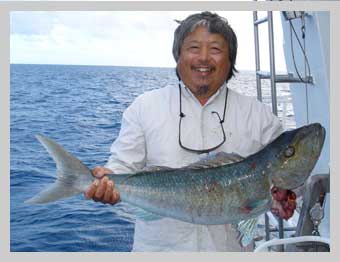 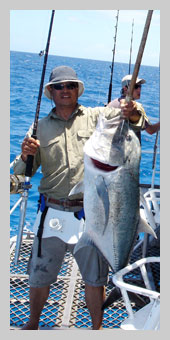 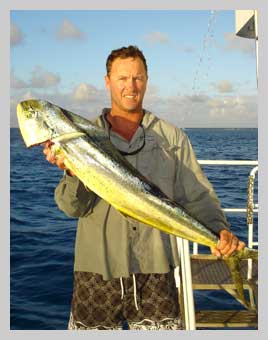 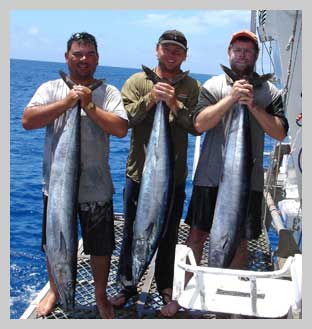 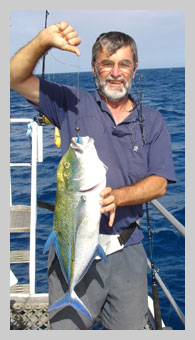 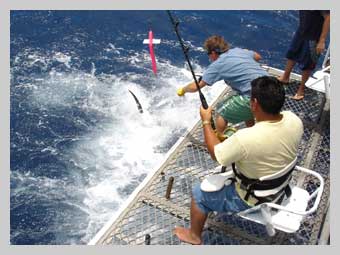 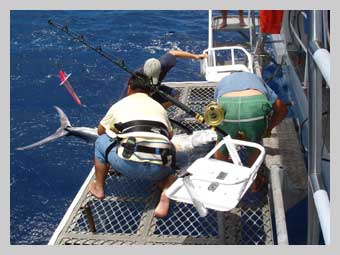 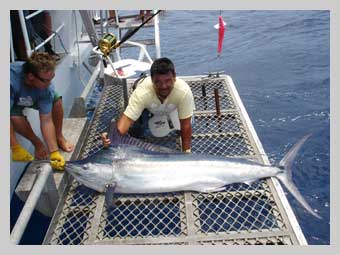 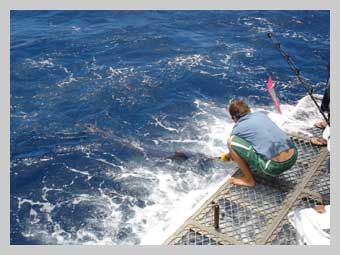 More Images from this charter can be viewed at Jason’s Web Site… Yeh Jason!

PS I’m Waiting for your story Bruce R.! And here it is:

The possibility of a ten day/three reef adventure on Kanimbla is enough to gladden the heart of any super seaman. Wednesday 26 October 2005 was the date on everyone’s mind and many of us arrived the day before – just to ensure that we could corner the local fishing tackle market prior to departure. As it was closed season for the Great Barrier Reef we knew that, come what may, we had to travel out beyond the Swain Reefs and Saumarez Reef before we could fish in earnest. Fortunately there was no fear of cyclones as the water temperature was a few degrees too low for them to be spawned.

Bruce Stobo was skipper as usual with Deb, Charlie, Joel and Leisha as deckies. The trip out on the Kanimbla was into a 15 knot wind which gave the usual bumpy ride from when we cleared the harbour at 1300 hours. A few of us from the front cabins slept [or tried to sleep] in the saloon that night. Next morning we had the troll lines out and Jason Harlock [A Team] caught the first fish, a dog tooth tuna. Fish of the day was caught by Simon with a nice wahoo. Seven yellowfin tuna were landed and Matthew had his Okuma spinning reel stop working when its handle broke on a green job fish. Cheaper gear just has its problems in this environment! It had been a long trip out and we were glad to see the unique Frederick Lighthouse appear from over the horizon.

Friday saw a north easterly wind of 12 to 15 knots, and it stayed around this strength or slightly more for much of the trip. In the dories Simon caught a wahoo in both the morning and afternoon, Steve caught a lovely red emperor [fish of the day], Starlo got some dog tooth tuna and wahoo, Grant and Bruce got more dog tooth tuna. John Holt filled a large tub with job fish from Kanimbla. The morning fishing was generally better than the afternoon. It was great to get a good night of sleep in the lagoon at the southern end of the reef.

Saturday saw Grant catch a magnificent 44 kg wahoo [97 pounds] and Richard pulled in a coral trout of about 20 kg which was released. Nine wahoo were caught that day. The wind had slightly strengthened to 15 to 20 knots and was from the east. Fish of the day were jointly Grant’s and Richard’s????????????? ABC radio did a live broadcast with Kanimbla.

Sunday saw Joel and Jason Harlock with a wahoo each. George lost a marlin after a five minute fight off the south east corner of Frederick Reef. That afternoon we went to the sand cays inside the lagoon and Starlo caught a 10 kg Giant Trevally on spinning gear and a surface popper. David got a large moray eel and Simon an unusual peacock cod. A number of fishermen were busted off by red bass. There was certainly a lot of fish life around the cays – you only had to throw in burley to see sharks, GTs, blue spot trevally, and other varieties. White lippers were caught on the shallow reefs inside the lagoon as we headed back to Kanimbla. That night we headed out to the even more remote Kenn Reef.

Monday saw the usual 15 knot easterly wind at Kenn Reef. Most headed out in dories and a number got around the substantial chop at the north end of the reef to fish the eastern face. Grant lost a marlin after a short fight, yellowfin were everywhere and John landed three to 22 kg, trolled up a large [just under the upper legal limit] coral trout and, four GTs [largest at 26 kg]. We headed to the southern end at lunchtime and in the afternoon Jason Harlock lost a marlin, Simon caught a sizeable wahoo and Grant managed another wahoo. Simon took fish of the day and it was felt that John should be awarded fisherman of the day due to his large and impressive haul.

That night we had jobfish for tea and it was the classical music night – a welcome change, for some, to the deckie’s music.

Tuesday was Melbourne Cup Day and while we remained on Kanimbla in the morning as a result of squalls, we were out in the dories and couldn’t care much about the horses in the afternoon. The morning from Kanimbla saw jobfish, red bass, Paul with a good coral trout and, Dom with a 23 kg GT. The afternoon from the dories saw John and Bruce troll up some sizeable coral trout and jobfish. One dory landed on the southern most part of the reef, Boulder Cay, which has the remains of a long-liner on it. Boulder Cay registered as 335 miles from Gladstone, hence the northern end of the reef is about 340 miles from Gladstone – a long way indeed. We sat in behind Observatory Cay that night.

Wednesday saw an increase in wind strength to 20 to 25 knots and we bottom fished from Kanimbla for the whole day. This was, in some ways a relief, as we were beginning to get a bit exhausted by the almost continual buffeting in the dories. We caught a good variety and size of fish; blue spot maori cod, jobfish, coral trout, large red bass, white lippers, dogtooth tuna, and coronation trout. Fish of the day was taken by Paul Khoo with a lovely leopard trout. That night we travelled to Wreck Reef. The sea was on the beam and the ride was relatively gentle.

At Western Islet we anchored in a scenic lagoon between 3 small reefs. The wind dropped to ten knots and we had some of the fishiest looking water that I have seen. There were big schools of birds and a strong current run down the western side The results were mediocre from our high standards with yellowfin tuna and striped tuna. In the afternoon a few large fish were lost from the dories while others went snorkelling in the pristine and remarkably clear conditions. It was then time to pack up and head west towards Australia. David got fish of the day with a shark.

The ride home was very comfortable with the following sea and on the way John caught a marlin of about 50 to 55 kg.

Thanks were given especially to Richard for providing his squab, Steve for the ‘attachment cords’, Jason for burning off DVDs of everyone’s photos and videos and, to the skipper and crew for their magnificent service. Photographs and videos are on Jason’s website http://feverfeverfever.com/pages/fishing-pictures.html .

The new perpetual ‘Fish of the Trip Trophy’ was awarded jointly to Grant and John for their wahoo and marlin.

Bruce Stobo was awarded the ‘Bullshit Award’ for suggesting that we should assist the deckies by not catching any fish for ten days.

The feeling by all on board was that future trips would only need to include two outer reefs, as three reefs is too many in this period of time. One of the reefs will almost certainly always be Frederick Reef due to its sheltered anchorage.

In summary, despite a little more wind than desirable, it was another fantastic trip on Kanimbla.