Missiles of the Coral Sea

Missiles of the Coral sea 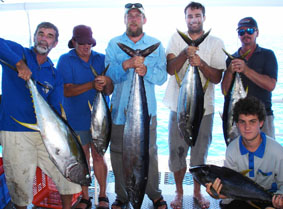 During the weeks leading up to our pre-Easter trip all eyes anxiously watched the devastation from a dissipating Cyclone Ingrid. Even when first boarding Kanimbla and greeting other charterers we were not sure of our destination. It was not until Bruce Stobo came on board in the late afternoon and suggested Saumarez Reef as our first stop that we could let out a sigh of relief. Our previous few trips had been only as far as the Swain Reefs due to inclement weather.

The trip to the southern end of Saumarez was typically bumpy with a south easterly swell and winds of 20 knots. There were no hook-ups from trolling the open ocean on the Sunday morning. At the southern end we managed some Green Job Fish, Japanese Sea Bream [White Lipped Emperor], Spotted Cod [Trout Cod] and, a number of Barracuda. That night Bruce Stobo advised that due to a “blocking low pressure system” near and a number of days of fine weather and light winds ahead, we may be able to proceed to Frederick Reef – our fabled fishing Nirvana!

On Monday we trolled from the southern end of the reef to the north east cay via Zenobia Rock. Fishing on the troll saw only the occasional Job Fish and Mack Tuna. During one of the stops Bruce lost a sizeable fish, probably a Dogtooth Tuna after it went under Kanimbla and used the necessary slack line to run into the coral. In the dories, Jason, Chris and, Ged managed to get some good Job Fish about eight kilometres west of the Cay. George managed to teach sharks how to fly – and, he still kept his fish. Vaughn and Reg got a nice Coronation Trout each and there were generally a number of Job Fish and Trout Cod caught.  The seas were smooth as we weighed anchor and headed for Frederick Reef at 1800 hours.

The first dory session at reef was well rewarded with between two and four Wahoo caught per dory. There were also Yellowfin Tuna, Job Fish and White Lipper caught. Fish littered the rear deck of Kanimbla as the deckies were in overdrive trying to keep up with the mass of fish. There was a lesser repeat of this in the afternoon and some, like Vaughn, caught their first ever Dogtooth Tuna, Yellowfin, Wahoo and Job Fish that day. For a number of charterers this was their best ever day of fishing and a couple said that they ‘could now go home satisfied, even if they caught nothing more’. There was no cloud, the wind was two to three knots and the swell was slight – a perfect day. At lunchtime we rang one of our friends in and, we were not sure that he could actually believe our story of good luck.

On Wednesday morning a northerly wind was blowing at 13 knots and did not drop till that night. We got lots of White Lipper, some nice Coronation Trout, Maurice caught a Wahoo on the troll and Daniel got a lovely Blue Spot Cod. Again we spent the night in the lagoon at the southern end of the reef.

Thursday saw a light northerly breeze and no swell as we started with an early dory session at the northern end of the Reef. To say that it was ‘The Day of the Hoo’ would be an understatement. They were hungry and everywhere! Bring a Hoo to the dory and six of his mates would come with him and swim around waiting to see if he reappeared and, would take jigs lowered to them. There were various triple hook-ups and most fish were lost – due to thrown hooks, being spooled and crossed lines. Some Wahoo were jumping over six metres in the air. Even so, all dories initially unloaded their catch to Kanimbla within the first hour as the weight of fish slowed them down and took up floor space. The tally of wahoo increased and ‘standing orders’ became ‘try to release all you catch’. The best guesstimate is that there were about sixty hook-ups from Wahoo in that early session. Dave caught a magnificent thirty three kilogram Wahoo that morning which went on to become ‘fish of the trip’. At lunchtime we headed back for a long troll over the voids. Jason hooked a good marlin on the troll and sadly, it threw the hook early in the battle. Bruce left his lure out into the night and caught a pesky Barracuda near Zenobia Rock. 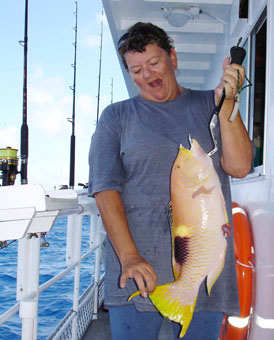 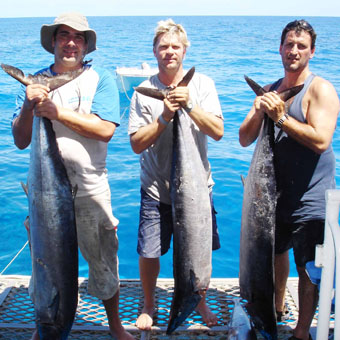 Friday morning saw continued fantastic weather as we unsuccessfully trolled to the 100 metre line in the local reefs. There we caught a few Snapper [our southern pinkies] a few good Coral Trout, some Sweetlip but no Red Emperor. On the trip home that night we were witness to a spectacular lightning show in two storm cells. The crescendo was when a waterspout was hit, and then illuminated, by a bolt of lightning.

The Captains [Adam Houghton was the actual skipper, having obtained his Master Class 5. Bruce S. was mentoring] and crew provided their usual magnificent service. Kanimbla continues to be the “boat of choice” for discerning charterers and avid fishermen.

Ahoy All!, Our 2005 charter season is well underway and whilst the wind has been our contant companion for most […]